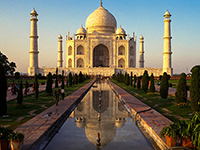 Join us for an incredible week of tennis and culture.

The India Tennis Centre in New Delhi will be your base for the week. With its state-of-the-art facilities including the luxurious Davis Cup Lounge, the sporty café lounge – baseline café and trendy youthful bar – Aces and Faults, all providing a luxurious ambience, delectable cuisine impeccable hospitality and warm service. India Tennis Centre has been host to The Davis Cup, ATP and WTA tour matches + The Common Wealth Games 2010.

*Not included in the price

Other overnight flights available with Air India and Jet Airways from Heathrow.

Gurudwara Bangla Sahib is one of the most prominent Sikh gurdwara, or Sikh house of worship, in Delhi, and known for its association with the eighth Sikh Guru, Guru Har Krishan, as well as the pool inside its complex, known as the “Sarovar.” It was first built as a small shrine by Sikh General Sardar Bhagel Singh in 1783, who supervised the construction of nine Sikh shrines in Delhi in the same year, during the reign of Mughal Emperor, Shah Alam II.

The grounds include the Gurudwara, a kitchen, a large (holy) pond, a school and an art gallery. As with all Sikh Gurdwaras, the concept of langar is practised, and all people regardless of race or religion may eat in the Gurdwara kitchen (langar hall). The Langar (food) is prepared by gursikhs who work there and also by volunteers who like to help out. At the Gurdwara, visitors are requested to cover their hair and not to wear shoes. Assistance to foreigners and visitors with Guides, head scarves, and shoe-minding service can be found inside the compound and are available free of charge. Anyone can volunteer to help keep the shoes in the shoe-minding room and cleaning the precincts of the Gurudwara.

Lodi Gardens are a favourite spot for Delhi’s morning walkers, joggers and yoga enthusiasts. There are several beautiful buildings here that date from the 13th to the 16th centuries when Delhi was ruled by five successive Sultanates. Later, the British developed the area into a garden dotted with medieval tombs, mosques, a water body, a bridge and other ruins. The charming hesitancy of Indo-Islamic architecture in its nascent stages, combined with the British love of landscaping, makes walking through Lodhi Garden a unique experience.

The Qutb Complex (built at the site of Lal Kot, the first city of Delhi) is a UNESCO World Heritage site that marks the arrival of Islamic rule in India. Created by the Slave Dynasty who ruled India for nearly a century, the complex is a grand cultural statement marking the beginning of a new religion that transformed the country. In the initial phases, the new rulers demolished Hindu and Jain temples, but reused the pillars and stones, creating structures unique in the Islamic world.

Humayun’s Tomb: Humayun was the second Mughal Emperor who ruled present A Afghanistan, Pakistan, and parts of northern India from 1530–1540 and again from 1555–1556. His tomb, built in 1570, is of particular cultural significance as it was the first garden-tomb on the Indian subcontinent. It inspired several major architectural innovations, culminating in the construction of the Taj Mahal. It is also a UNESCO World Heritage site.

The Taj Mahal – A monument to love, or an emperor’s grandiose folly – whichever way you look at it, the Taj is an incredible sight and is likely to be the highlight of your trip. Your guide is knowledgeable about the monument history and architecture and will help you appreciate the wonder of its creation.

Apart from the guided tour, we also recommend that you spend some time by yourselves in a relaxed manner to really take in the enchanting beauty of the Taj Mahal. Let the guide know if you want to do this at the beginning of your visit, or after the visit.

Agra Fort – Three generations of Mughal Emperors built the Agra Fort – Akbar built the walls and gates, his grandson Shah Jahan erected many of the ethereal buildings inside it, and his great-grandson Aurangzeb built the ramparts. It is one of the most fascinating Mughal forts of India and a UNESCO World Heritage Site.

Tour Notes: Large parts of the Taj and Agra Fort Complex have no trees or shade. Please bring adequate sun protection. Shoes are not permitted on the marble floor of the Taj; special socks are provided by the monument authorities (included in the ticket price). Please speak to the guide for rules regarding your bags/what you can and cannot take inside the monument.

This is an off-beat and fun tour of Delhi by students from Manzil, an NGO that works in youth empowerment and learning. The tour uses the Delhi Metro, as well as the cycle-rickshaw. The tour provides income for the student-guides and also helps to finance some programmes at Manzil. Please ask your guides for more information about Manzil if you wish to contribute to their activities or if you wish to see Manzil’s centre in Delhi.

The tour covers both New Delhi and Old Delhi.

It starts at Connaught Place, with an introduction to the history of Delhi, and a geographical orientation of the city. From Connaught Place, we take you on a driving exploration of ‘Lutyens Delhi’ – the city of grand public spaces designed by the British, which is now called New Delhi. We drive through the Central Business District, seeing the markets and businesses there. We go to the Lutyens Bungalow Zone, Janpath, Rajpath, and visit the President’s House, Parliament House, Secretariat and India Gate.

After this, we board the Metro to go to Old Delhi, where we experience the bustle of the bazaars both on foot and using cycle-rickshaws. We will visit Dariba Kalan (the silver market), Kinari Bazaar (wedding market) and Paranthewali Galli (Lane of Parathas). We will go past the famous Jama Masjid (the largest mosque in India). We’ll visit Gurdwara Sees Ganj Sahib, built at the site where Guru Tegh Bahadur, the ninth Sikh Guru, was beheaded for refusing to convert to Islam. We will also see Hindu temples, Jain derasars and churches, all standing cheek-by-jowl.

The final stop is at the legendary Haldiram’s for snacks (try Delhi’s popular chaats!) and a cold drink. After that, we clamber on to the Delhi Metro again, to end the tour at Connaught Place.

Tour Notes: You will visit several traditional areas of Delhi so it is advisable to dress modestly. Some religious monuments require both men and women to cover the head with a scarf or a large handkerchief. You have to take off your shoes at places of worship. Leather articles such as belts and handbags are not permitted in the Jain derasar should you wish to go inside.

Akshardham means the eternal abode of God. This stunning temple complex took 11,000 people five years to build, and it was inaugurated in November 2005. Built of pink sandstone and white marble, the temple has 234 ornately carved pillars, 9 ornate domes, and an extraordinary plinth of stone elephants. Surrounding the temple are 20,000 statues of India’s gods, goddesses and philosophers.

If you visit Akshardham, you can explore this stunning temple, and also take a 12-minute boat ride for a glimpse into India’s history as well as traditional Hindu life. There are also several other interesting exhibits at the temple, please see www.akshardham.com for details.

We will then visit the Lotus temple. The Bahá’í House of Worship in Delhi was completed in 1986 and serves as the Mother Temple of the Bahá’í faith in the Indian subcontinent. It has won numerous awards for architecture. The Lotus Temple is open to all regardless of religion, or any other distinction, as emphasized in Bahá’í texts. It is a serene place for meditation.

Interactive Cooking and visit to a Local Home

In this tour, we visit a local home in Delhi for an interactive cooking session and dinner. The cooking session will be led by the lady of the house. There is no “standard menu” for the meal; it is based on the season and what’s available in the market. The menu is vegetarian. While this is not a cooking class conducted by professionals, you’ll find yourself learning a lot about Indian food because of the interactive and friendly nature of the session. This tour also provides a chance to visit a “regular” Delhi home, see what family life is like, and chat about daily life in the city.

Before the tour, we will visit the neighbourhood food market to introduce you to the spices, fruits and vegetables used in Indian cooking. If you have any questions about Indian spices, cooking techniques or regional specialities, you are welcome to ask your hostess during the walk.

Cooking takes 60 – 90 minutes, after which you will eat together. After the tour, we will drop you back at your hotel. If you do not wish to participate in the cooking and prefer to only watch and photograph, that is fine as well.

Two of the most famous shows playing at Kingdom of Dreams are Zangoora-The Gypsy Prince and Jhumroo, a musical tribute to legendary singer Kishore Kumar. Nautanki Mahal is the venue of these two shows, which is built in a state of the art manner, complete with matrix sound system for a more real and enjoyable theatre experience.

To enjoy arts and culture from across the country head to the Culture Gully in the Kingdom of Dreams. Spread over an area of 1,00,000 sq ft there are restaurants representing 14 states from across India. Each restaurant has a unique theme and showcases something unique about the state. The Culture Gully has two lounge bars, the Mekhana Bar and the Kerala Bar.

Apart from that the Kingdom of Dreams also has handicraft and souvenir shops and also has street performers and massage centres.